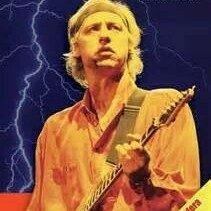 I chose my user name because I am a massive fan of Mark Knopfler, the founding member of the group Dire Straits and writer of some great songs;  these include Sultans of Swing, Romeo & Juliet, Private Investigations, Walk of Life, Telegraph Road and Brothers in Arms.  He also played with BB King, Bob Dylan, Eric Clapton, The Notting Hillbillies, Chet Atkins, Emmy-Lou Harris, and wrote great film tracks, the most famous being Local Hero and The Princess Bride.  He also wrote the Tina Turner hit Private Dancer; he wouldn't record it on an album as he thought it not neccessarily a man's song (I wonder why?).  However, although the members of Dire Straits played on the single, he himself declined to perform,

I was born in Fulham, London but now live in Northamptonshire with my husband Peter.  We have no children or resident animals, but we do have the occasional local 'moggy' who come to visit us!