In Puzzle Beach you need to help the funny pirates to defend their treasures against thieving monsters from the deep of the sea. The game belongs to the genre 3-in-a-row, but in a whole new way. In each move you get a unit that you must place on the board - you choose where. If you place three identical units side by side, they melt together into a new unit. The units can be respectively constructions and defense. You can score many points by building constructions, while the defenses are important to keep the monsters at bay. You also have pirates that are both a hindrance and a help to you. They attack the monsters, but they also stands in your way, so you can not always build where you want.

Each move in Puzzle Beach is called a day, and in one day you can do one thing: You can place an unit on the board. Which unit you can place is determined by chance, but the chance of getting a particular unit gets higher the more units of the same type are already present on the board. When three identical units are placed side by side, they merge together into a unit of a higher level, and gives you points. The higher the level the units you merge has, the more points you get. During the game the monsters will come up from the sea going towards your treasures, that are always shown at the bottom of the game board. You must make sure that the monsters walk past those of your units that can attack them, otherwise they will get away with your treasures. The game ends when there are no more treasures left. You must never block the path from the sea to the treasure entirely, as this will make the giant squid angry! It will rise up from the sea, and begin to bomb your units randomly until there is a new path. You will want to avoid this from happening! On the left side of the screen you can see your next unit, and you have the ability to store up to four units, for later use. There is also a game store where you can use the diamonds you win along the way to buy new units and special upgrades. If you place an unit incorrectly, you can undo this by hitting the button in the bottom left corner.

The game is built around the worlds and missions. In each of the game's seven worlds there are five missions. The first four missions are a form of training, while the last mission is the real challenge where you compete against other players to set a high score. This last you will need to play again and again. In the training missions, you can also set high scores, e.g. by completing them quickly or above the required score. The goal of a training mission is e.g. to build four houses in 100 days, or to score 100,000 points within 75 days. When you complete a mission you get either gold, silver or bronze stars depending on how well you do.

At the top of the game you can see an indication of what mission you are playing, and how far you've come. You can also click on Menu to get the description of the mission. 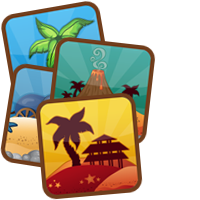 The game has seven worlds, each with subtle differences. They are listed here: Peaceful Ocean - The first world gives slightly shorter games. Eastern Channel - Here you will get many stars, but a slightly smaller game board. Pirate Strait - This world has extra many pirates. Southern Sea - You have fewer treasure chests, and the board is very small. Cannon Bay - Here there are more chanced to build a defense. Captain's Seaway - The game board is extra large here. Golf of Squids - In this final world there are plenty of squids.

Here is a survey of the game's various units: Constructions - starts with a tent that can be upgraded six times:

Defence - starts with a barrel that can be upgraded four times:

Pirates - starts with a ship's boy that can be upgraded three times:

Star - it can replace any other unit.

Shovel - it lets you pick a unit up and place it in a new location.

Wrench - with this you can repair other units, or give them an extra life.

Bomb - you can drop a bomb on an unit or a monster to remove it.

In the game shop you can use your diamonds to buy all of the above units in limited quantities, and these additional upgrades: Storage expansion - from the beginning, you have one extra storage space, but it can be extended to four spaces.

Treasures - if you loose your treasures, you can buy new ones in limited extent.

Air strikes - if there are too many monsters on the board, you can call the bomb parrots.

In the game menu, you can find a list of honour marks. These are special awards you can achieve by playing a lot or skillfully.

A Bonus Spin is achieved by eliminating three gold crabs. They occur randomly during the game instead of the normal monsters.
Back to game