Neighbor Wars is a two-player game where the goal is to put your opponent's house in ruins. Each player takes turns to play. You need to collect symbols that you can use to trigger various attacks. Once you have made your move, you can either wait for your opponent to respond, or you can play a game against another opponent. You can easily have multiple games running at once.

The first thing to do is to find an opponent. Click on "New Game" to see these options: Random - here you get a random opponent, with a rating as close to your own as possible. Friend - here you can choose among your Playandwin friends. They will receive a notification on your challenge. Chatter - here you can choose one of the players who is in the Neighbor Wars chat room right now. Once you have found an opponent the game starts. If you have selected a random opponent, it is not certain that you make the first move, however when playing against friends and chatters you will always start first. 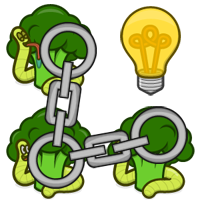 During your turn, you always have five moves to do one of the following actions: Collect symbols - by drawing a continuous chain of identical symbols, you can collect them. Unleash attacks - if you have collected enough symbols, you can trigger an attack on your opponent's house, by pressing the button for the attack you want to use. Before you can trigger an attack, you must unlock it. The procedure is the same - you need to collect symbols, and then choose which attack you want to have access to. It does not count as a move to add a new attack, but you can only get access to three different attacks per game.

In order to activate some of the attacks, you need cash to buy them. You get the cash by completing daily challenges such as "Win 3 matches" or "Collect 10 symbols in a row." You can find your daily challenge by clicking on the pile of cash on the game's start screen. You can store a maximum of three daily challenges, so be sure to complete them as soon as possible.

You start the game with 2000 rating points. When you play against an opponent with a rating close to or higher than your own, you earn more rating points when you win, than you do against a lower rated player. Use the random opponent option to find a worthy opponent. To avoid that users with extremely high ratings occupy the top places forever by not playing, we have made it so that the ratings automatically drop by 1% when you don't play in 14 days.
Back to game